During the Civil War, Congress enacted new veterans benefits laws including the General Pension Law of 1862. This law and its later amendments created a system for disabled and retiring veterans of the Civil War, and formed the basis for veterans of the Spanish-American War, Boxer Rebellion, and other conflicts to receive their benefits through the end of the twentieth century.

“An Act to Grant Pensions” 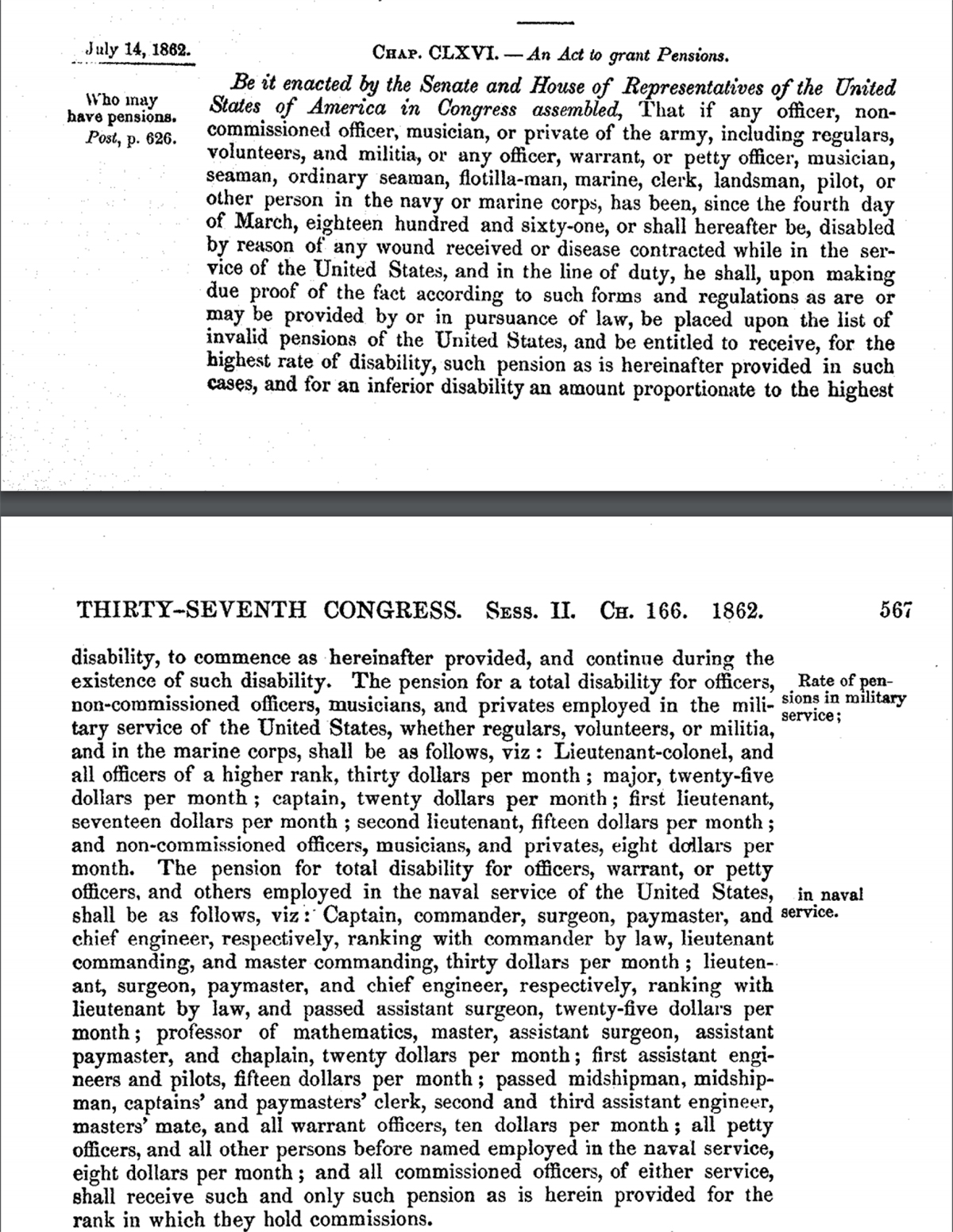 On July 14, 1862, President Lincoln, “with practically no opposition from either house,”[i] signed into law an act known as the “General Law” that created a disability pension system for U.S. Civil War veterans and their families.[ii] The general law was rather remarkable in that it covered mental as well as physical injuries, and instituted a medical ratings system to rank the nature and severity of an injury and its impact on a veteran’s ability to work—a precursor to today’s disability ratings system. The law set the effective date of a claim for benefits as either the date of discharge, if filed within one year, otherwise from the date of the application. Under the law veterans could retain an attorney or claims agent to help file their claim, but in an attempt to prevent fraud and abuse, Congress capped the fee that veterans could be charged at $5.

SEC. 6. And be it further enacted, That the fees of agents and attorneys making out and causing to be executed the papers necessary to establish a claim for a pension, bounty, and other allowance, before the Pension Office under this act, shall not exceed the following rates: For making out and causing to be duly executed a declaration by the applicant, with the necessary affidavits, and forwarding the same to the Pension Office, with the requisite correspondence, five dollars.

Several weeks later on August 12, 1862, the New York Times published the text of the act in its entirety with instructions on how to apply.

ARMY PENSIONS.; Instructions and Forms to be Observed in Applying for Them, Under the Act of July 14, 1862. GENERAL PROVISIONS. ARMY PENSIONS.

President Lincoln delivered one of the most famous speeches in history on November 19, 1863, at the dedication of the national soldiers’ cemetery at Gettysburg, Pennsylvania. 50,0000 troops were killed at Gettysburg in just three days of battle, making it the bloodiest engagement of the war. 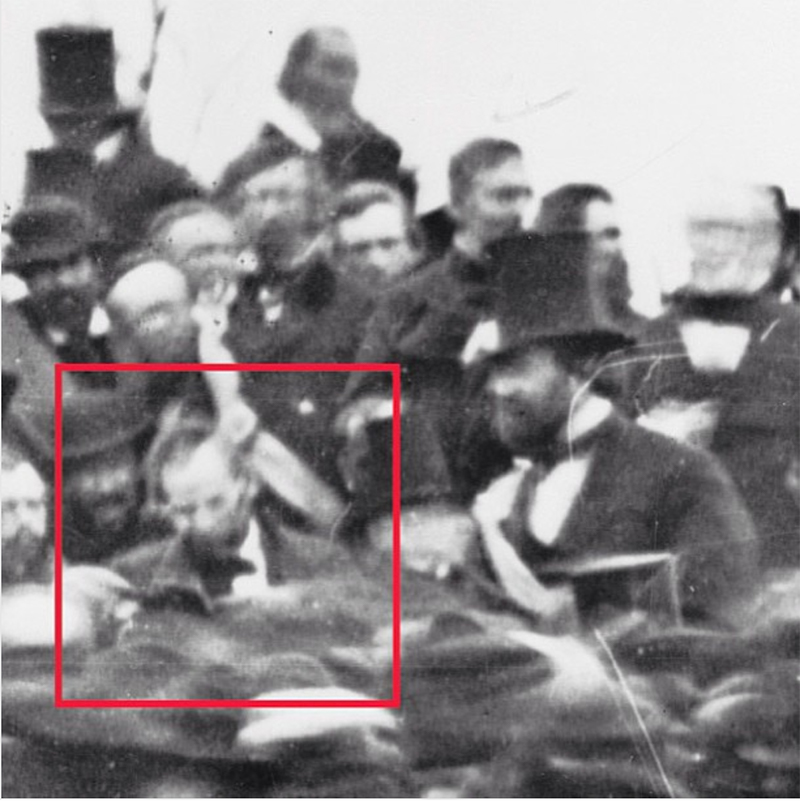 Four score and seven years ago our fathers brought forth on this continent, a new nation, conceived in Liberty, and dedicated to the proposition that all men are created equal.

Now we are engaged in a great civil war, testing whether that nation, or any nation so conceived and so dedicated, can long endure. We are met on a great battle-field of that war. We have come to dedicate a portion of that field, as a final resting place for those who here gave their lives that that nation might live. It is altogether fitting and proper that we should do this.

But, in a larger sense, we can not dedicate—we can not consecrate—we can not hallow—this ground. The brave men, living and dead, who struggled here, have consecrated it, far above our poor power to add or detract. The world will little note, nor long remember what we say here, but it can never forget what they did here. It is for us the living, rather, to be dedicated here to the unfinished work which they who fought here have thus far so nobly advanced. It is rather for us to be here dedicated to the great task remaining before us—that from these honored dead we take increased devotion to that cause for which they gave the last full measure of devotion—that we here highly resolve that these dead shall not have died in vain—that this nation, under God, shall have a new birth of freedom—and that government of the people, by the people, for the people, shall not perish from the earth. 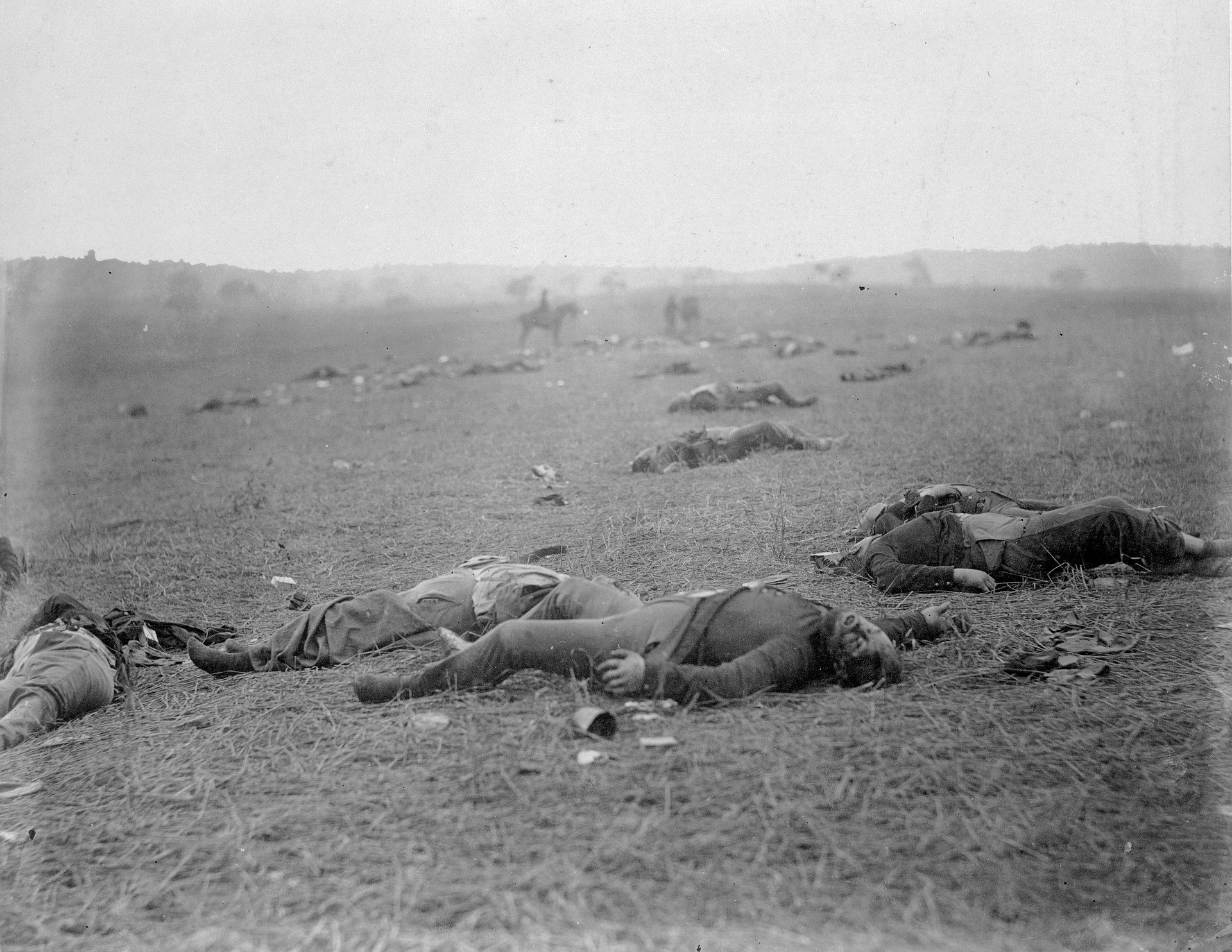 Abraham Lincoln was elected to a second term as the Civil War was drawing to a close. He delivered his second inaugural address on March 4, 1865, just six weeks before he was assassinated at Ford’s Theater, in Washington, D.C.

As reported by the New York Times, “The weather has cleared off bright and beautiful. The President and others reached the platform. The band played “Hail to the Chief.” Salutes were fired, and the President was cheered by an immense throng, composed of civilians and the military. After delivering the Inaugural Address he was again cheered, salutes were fired, and the band played.”

“…With malice toward none, with charity for all, with firmness in the right as God gives us to see the right, let us strive on to finish the work we are in, to bind up the nation’s wounds, to care for him who shall have borne the battle and for his widow and his orphan, to do all which may achieve and cherish a just and lasting peace among ourselves and with all nations.” 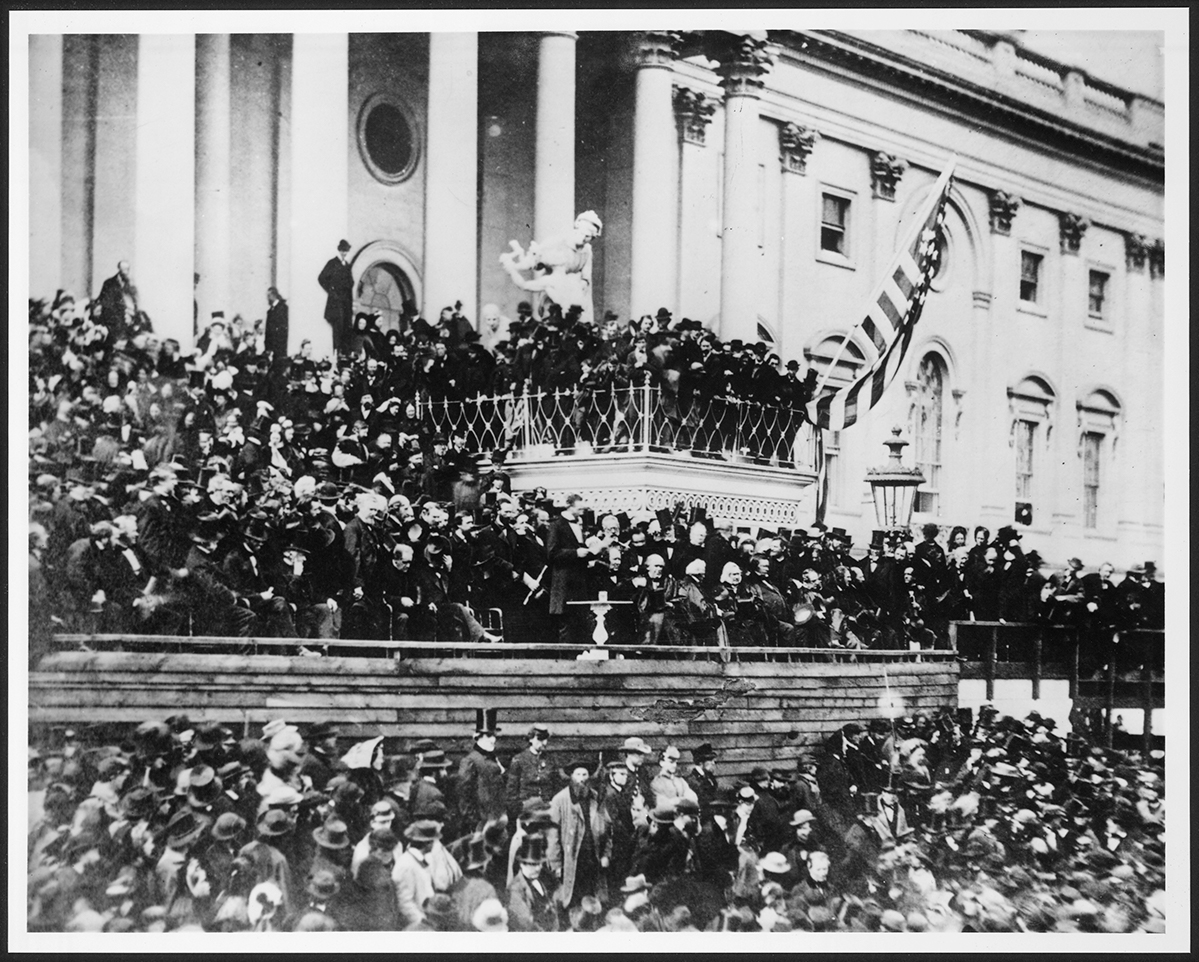 “An act to revise, consolidate, and amend the Laws relating to Pensions” 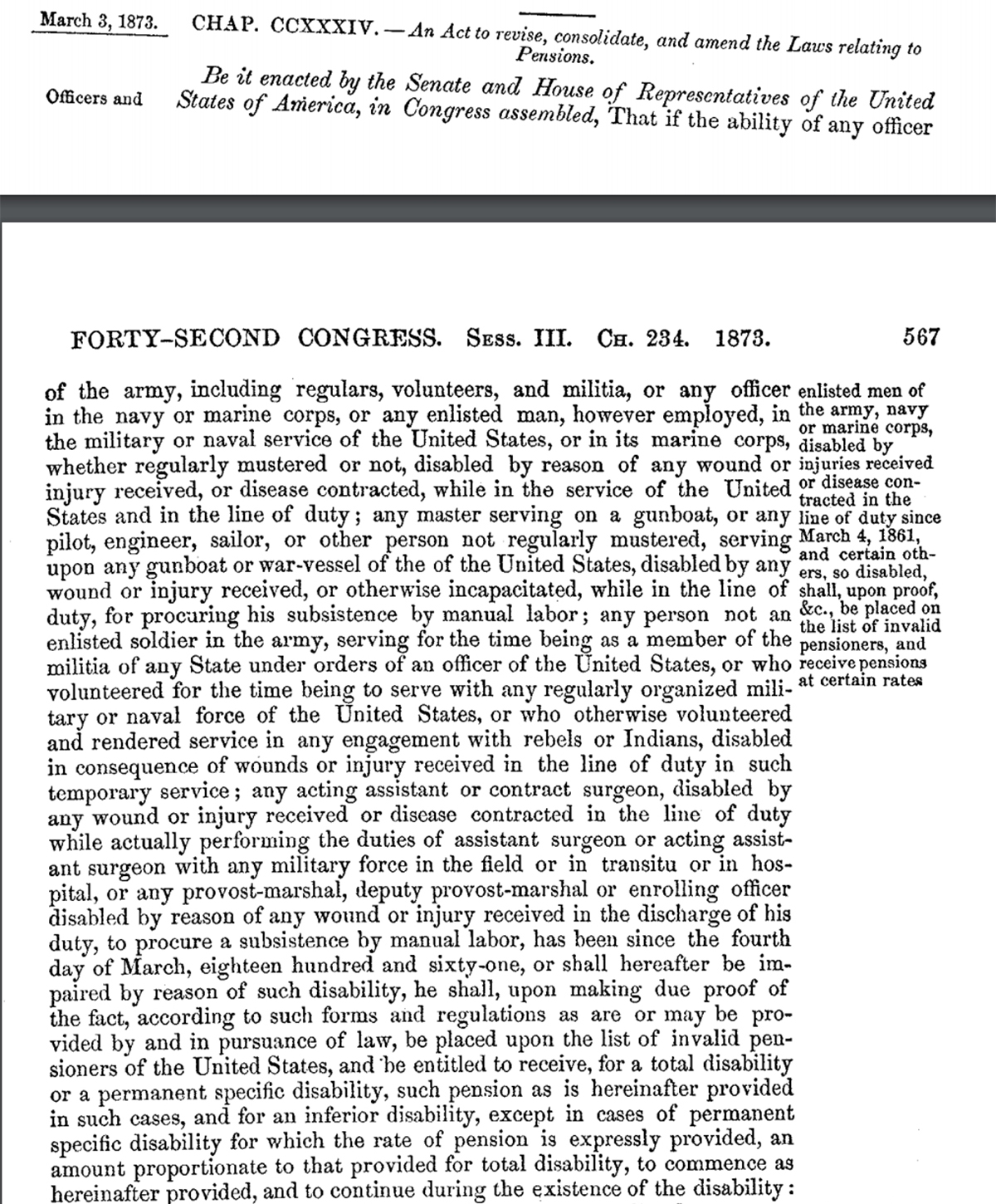 In the decade that followed the passage of the 1862 General Pension Law, a number of amendments eventually caused “a confused mass of laws,” which, as noted by the Commissioner of Pensions, required updating.[i] In 1873 the “Consolidation Act” restructured all existing veterans benefits laws as the federal government prepared for a surge of post-war claims. 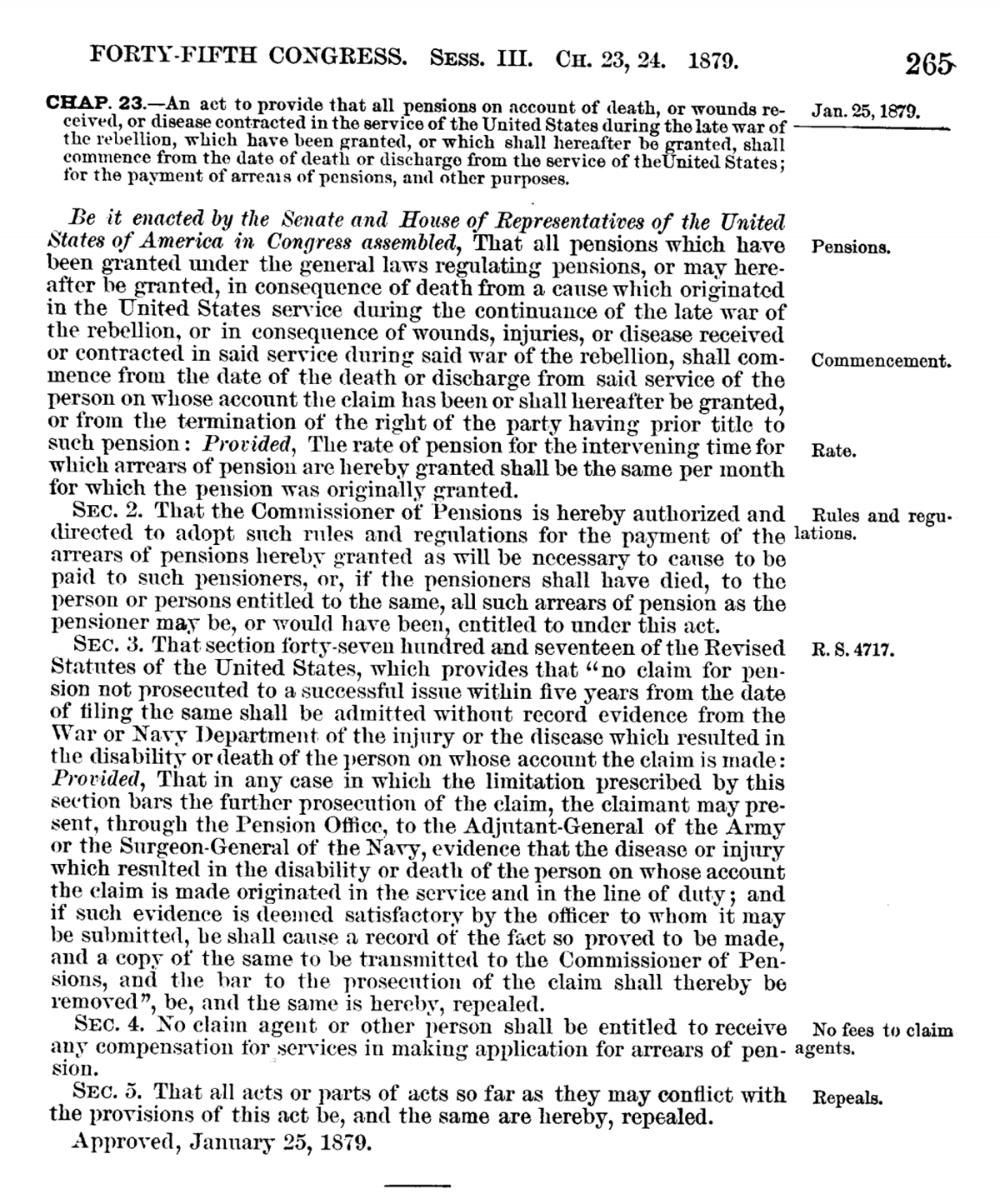 The “Arrears Act” of 1879 paid arrears, or back pay, from the date of discharge (or death) to thousands of disabled veterans and their dependents — rather than the date the claim was filed, as the 1862 general law called for. This controversial piece of legislation, promoted in large part by claims agents like George Lemon,[i] caused a flurry of new claims, many of which resulted in large lump-sum payments. “This was the claims agents’ harvest time,” said one historian.[ii] A 1955 House report later described one effect of the Arrears Act: 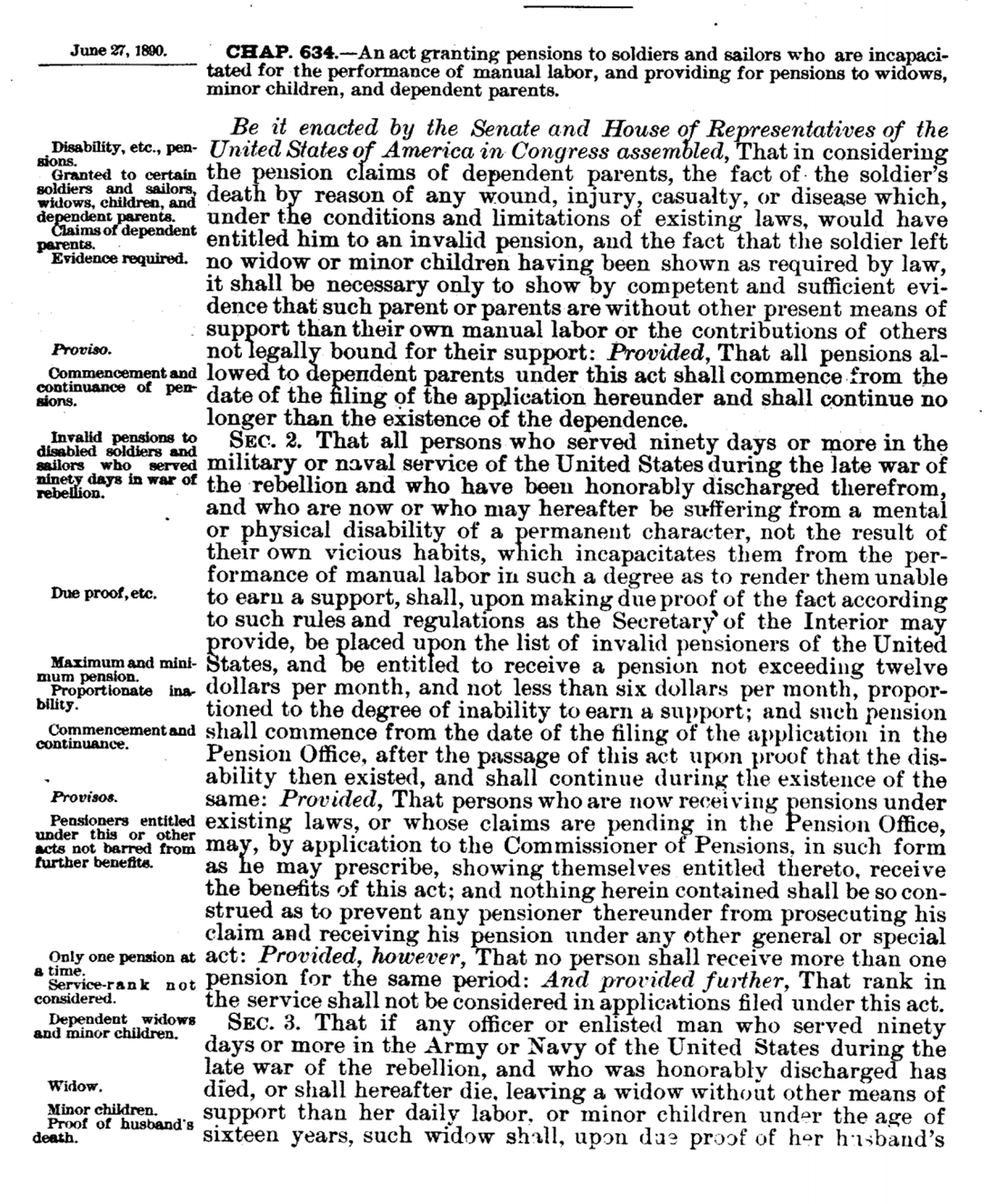 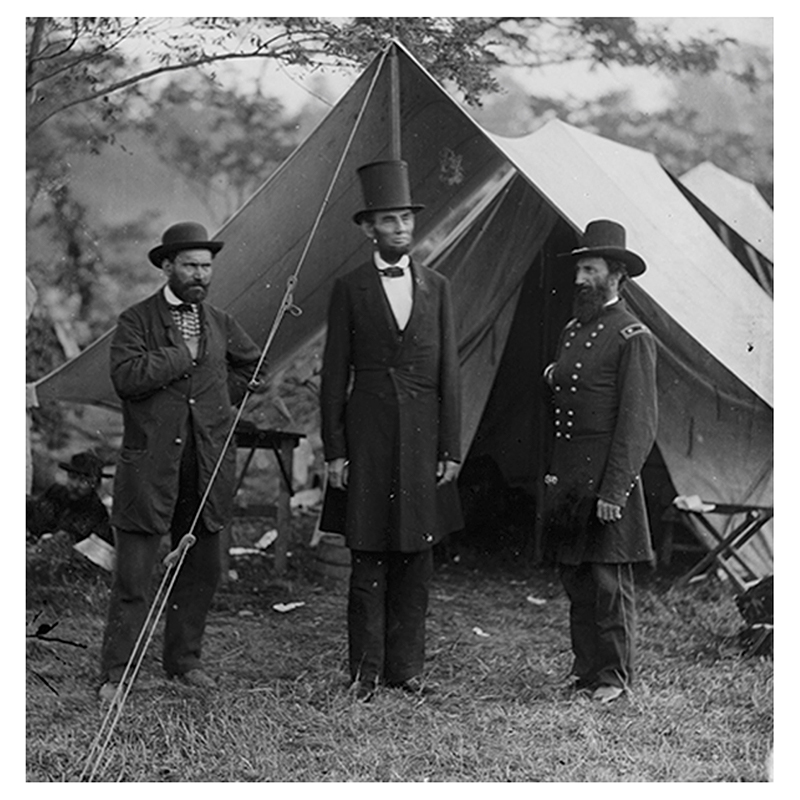 Use the links on this page to access original documents from online public records.

1836—July 4 (Ch. 362) (5 Stat. 127) An Act granting half pay to widows or orphans, where their husbands and fathers have died of wounds received in the military service of the United States, in certain cases, and for other purposes.

1837—March 3 (Ch. 42) An Act explanatory of the act entitled An act granting half-pay to widows and orphans where their husbands and fathers have died of wounds received in the military service of the United States, and for other purposes.

1848—Jul 21 (Ch. 108) An Act amending the Act entitled “An Act granting Half Pay to Widows or Orphans, where their Husbands and Fathers have died of Wounds received in the Military service of the United States,” in Case of deceased Officers and Soldiers of the Militia and Volunteers, passed July Fourth, eighteen hundred and thirty-six.

1849—February 22 (Ch. 62) An Act granting five Years’ Half Pay to certain Widows and Orphans of Officers, Non-commissioned Officers, Musicians, and Privates, both Regulars and Volunteers.

1871—February 14 (Ch. 50) (16 Stat. 411) An Act granting Pensions to certain Soldiers and Sailors of the War of eighteen hundred and twelve, and the Widows of deceased Soldiers.

1877—May 3 (Ch. 120) An act amending the pension-law so as to remove the disability of those March 3, 1877. who, having participated in the rebellion, have, since its termination, enlisted in the Army of the United States, and become disabled.

1878—March 9 (Ch. 28) (20 Stat. 27) An act amending the laws granting pensions to the soldiers and sailors of the war of eighteen hundred and twelve, and their widows, and for other purposes.

1879—January 25 (Ch. 23) **ARREARS Act – An act to provide that all pensions on account of death, or wounds received, or disease contracted in the service of the United States during the late war of the rebellion, which have been granted, or which shall hereafter be granted, shall commence from the date of death or discharge from the service of theUnited States; for the payment of arrears of pensions, and other purposes.

1884—July 5 (Ch. 223) (23 Stat. 120) An act to authorize the location of a branch home for disabled volunteer soldiers and sailors in either the State of Arkansas, Colorado. Kansas, Iowa, Minnesota, Missouri or Nebraska, and for other purposes.

1890—June 27 (27 Stat. 182) **An act granting pensions to soldiers and sailors who are incapacitated for the performance of manual labor, and providing for pension to widows, minor children, and dependent parents.

1892—July 27 (Ch. 277) (27 Stat. 281) An act granting pensions to the survivors of the Indian wars of eighteen hundred and thirty-two to eighty hundred and forty-two, inclusive, known as the Black Hawk war, Creek war, Cherokee disturbances, and the Seminole war.

1898—April 22 (Ch. 187) (30 Stat. 361) An Act To provide for temporarily increasing the military establishment of the United States in time of war, and for other purposes.

1902—June 27 (Ch. 1156) (32 Stat. 399) An Act To extend the provisions, limitations, and benefits of an Act entitled “An Act granting pensions to the survivors of the Indian wars of eighteen hundred and thirty-two to eighteen hundred and forty-two, inclusive, known as the Black Hawk war, Creek war, Cherokee disturbances, and the Seminole war,” approved July twenty-seventh, eighteen hundred and ninety-two.

1908—April 19 (35 Stat. 64) An act to increase the pension of widows, minor children, and various Indian wars, and so forth, and to grant a pension to certain widows of the deceased soldiers and sailors of the late civil war.

1910—June 25 (Ch. 393) An Act For the relief of soldiers and sailors who enlisted or served under assumed names, while minors or otherwise, in the army or navy, during the war of the rebellion, the war with Spain, or the Philippine insurrection.

1918—June 10 (Ch. 96) (40 Stat. 603) An Act To amend an Act entitled “An Act granting pensions to certain enlisted men, soldiers, and officers who served in the Civil War and the War with Mexico,” approved May eleventh, nineteen hundred and twelve.

1918—June 27 (Ch. 107) (40 Stat. 617) An Act To provide for vocational rehabilitation and return to civil employment of disabled persons discharged from the military or naval forces of the United States, and for other purposes.

1919—March 3 (Ch. 98) (40 Stat. 1302) An Act To authorize the Secretary of the Treasury to provide hospital and sanatorium facilities for discharged sick and disabled soldiers, sailors, and marines.

Troops “will not be persuaded to sacrifice all views of present interest, and encounter the numerous vicissitudes of War, in the defence of their Country, unless she will be generous enough on her part, to make a decent provision for their future support.”